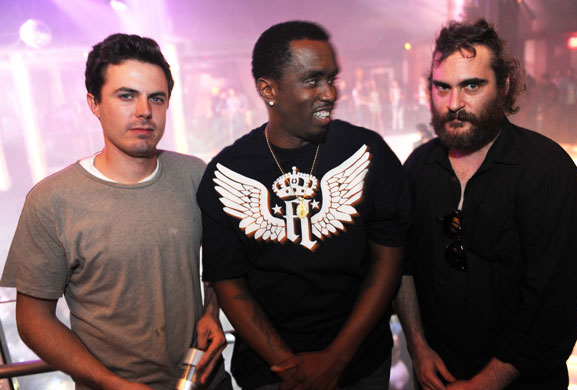 It was at the end of the first day of the Singularity Summit 2012 when Ben Popper — the dude from The Verge who I’d spoken to by phone — approached.  “What do you think?” he asked.  “It’s been pretty interesting,” I responded earnestly.  The absence of a superlative was perhaps telling, but I was not in the mood to think on it more deeply.  Ben agreed.  And then Eve and I made a wrong turn heading back to the North Bay and we found ourselves moving at a crawl through Chinatown.

Chinatown was throbbing with biological life of the human sort.  Old Chinese women were inspecting vegetables on display outside of stores.  A group of older men stood on a street corner just hanging out and talking.  The streets were packed to overflow with people going about their early Saturday evening activities.  I don’t think I saw anybody smiling, but I had the sense that people were enjoying their familiar activities.

Once home, I decided to finally watch I’m Still Here — the Casey Affleck film documenting Joaquin Phoenix’ supposed attempt to leave behind his acting career to become a rap star.  Fat; with long uncombed hair and scraggly beard, dressed like a particularly disheveled street person — throughout the film, Phoenix, along with some of his “handlers,” displays a full repertoire of coarse, vulgar, moronic human behaviors as he tries to pursue his new career.  He also appears in onstage performances, rapping… badly.  Various media commentators suspect that it’s a hoax, but Phoenix remains in character.  He puts Ben Stiller — trying to get Phoenix to consider a script —  through the ringer.  He acts pathetic and nuts in a famous Letterman appearance.   He’s trying to get Sean Combs to produce a rap album for him.

Watching this film — unsure myself whether the whole thing was a bit of Andy Kaufman-like performance art; a genuine descent into madness; or both (I was leaning towards both) —  and seeing how the various players tried to navigate how to respond given that they were experiencing the same uncertainty that I was — I was struck by the wheels-within-wheels-within-wheels multiple strange loopy character of the thing that I was not only witnessing but participating in by being engaged in confusion.  And I was struck by how many layers of uncertainly could emerge out of very stupid behaviors — behaviors, incidentally, that would likely hold little interest to a proper singularitarian; and all of it done for absolutely no rational purpose other than to fuck with people’s heads.  For what? To improve them? To teach them something?  No.  Just to see what happens.

The apex of this entertaining goof is reached when Phoenix and a Partner-In-Trick get a meeting with Sean “Puffy” Combs at his studio.  As Phoenix plays some terrible homemade rap recordings for him, we get to watch Combs try to navigate his way through the thicket of possibilities:

Combs’ face and body language show his utter bafflement in this situation — his codes have been so scrambled that they could never be decrypted because there’s nothing there.  He’s been blown into empty space, unable to respond to the stimuli at hand; but still he maintains a slightly gruff but agreeable facade.

Finally, we see Phoenix wandering in an apparent daze through some woods and then diving into a lake.  At the end, we see him swimming underwater. In context, after this layer cake of weird loops and inappropriate dumb behaviors, the moment is evocative.  Evocative of what exactly?  Nothing, exactly.   Just evocative.

As I prepared for sleep, I suddenly realized I couldn’t really remember a fucking thing I heard at the Singularity Summit.  Funny thing… I don’t even think the movie is all that good.

I’ve been sort of playing around with the concept — “Steal This Singularity” — for several months now.  Prior to attending Singularity Summit 2012, I was thinking about it in political terms.  Letting “singularity” represent, essentially, a buzz word for a future radically transformed by technology, my “Steal This Singularity” notion was simply that the transhuman future should not be dominated by big capital and/or authoritarian government; and that — contrary to the reassurances of many glib futurists — this requires some intentionality, both in terms of programming and activism.  The technology doesn’t insure this by its very nature.  And the current general trend in this regard is not positive, but extremely ambiguous at best.  But I’ll save that for another essay.

Upon spending an afternoon at Singularity Summit and spending an evening vicariously experiencing Joaquin Phoenix’ trickster walkabout, another feeling emerged and, with it, a different sort of “Steal This Singularity” theme.  To wit: the clever, logical, programming/engineering monkey-mind should not be allowed to instantiate its limited idea of humanity, the universe and everything, on… well… humanity, the universe and everything.   The tricksters, the freaks, the surrealists, the hedonists, the outsiders — and all the uncodable strangeness that emerges from the biological codes’ diversification into cultural complexity and then into something as perverse and rationally pointless as a multilayered prank in a cinematic celebrity culture —  must hijack the engineer’s Singularity and recode it or uncode it so as to allow for liminal spaces outside its totalizing grasp.

We live in a time in which seemingly smart humans love to present us with absolute dualistic options: Republican or Democrat, socialist or free market; believer or atheist; Britney or Christina; Science or Superstition.  These discourses are dominant even among an intellectual class that used to know better; and the notion that there could be terrain outside those frames becomes, well, not exactly unthinkable but somehow too trivial to consider as anything but a sideshow.

I’m aware of the risk here in even implying that the instantiation of the biases of the engineering monkey mind over everything is a conscious or unconscious intention  that undergirds much of the Singularitarian sensibility. Singularitarianism and — more broadly — transhumanism — has produced a veritable glut of abstract theorizing, so whatever novel perceptions or objections or concerns one may think one is bringing to the party, some smarty pants has probably swatted it away or incorporated it into its logical totality.

On the other hand, if there was a role for artists in Singularity Summit 2012, I didn’t notice it.  Sex — a primary desire for most humans — seemed to be almost unmentionable, if not entirelyarchaic.  Heightened subjective states of consciousness — ecstasy, agape, rapture — seem to be well off the map.

Of course, it’s part of the culture of science that legitimacy requires the maintenance of a bordering-on-Calvinist front, but consider that when I interviewed (with Surfdaddy Orca) Ray Kurzweil for H+ magazine a few years ago, and suggested that the idea of utopia might involve people feeling good and being happy, he immediately leapt to a vision of people hanging around all the time on a morphine-like high.  (I actually think several billion human beings acting out the sort of western ideal of ambitiousness with Singularitarian technology is probably scarier than having most of them in an opiated haze, but I don’t think those are the only options. Anyway, that’s a different rant for a different time.)

This lack — this apparent negligence or denial or trivialization of non-obvious aspects of  subjective human experience and peculiarity — may prove to be of minimal importance if transhuman techno-evolution stops short of the Singularity.   If we don’t design silicon intelligences that will, for all intents and purposes, replace us — or at least dominate our original biological brains if we take them within us — but, if rather, we simply end up with tools that amplify and enhance, then there’s a reasonable hope for a diversity of mindstyles.  Some will gather in Less Wrong communities where they will continuously refine rationality; some will live in an eternal, amplified Burning Man of lived art, presentation and playful deviance; most will dip into both these and other memeplex scenes while engaging in a world rich in opportunity for all possible expressions of humanness or posthumanness.

But supposing that we do create the vastly superior intelligence.  Even if we merge with them, what aspects of humanness that some of us may wish to preserve will be overwhelmed?  Will the imp of the perverse, as displayed in my Joaquin Phoenix example, still stun our predictable mentations into momentary silence?  Can the engineered superior intelligence experience something as evocative, or is that too vague?  Will some of us still be driven into ecstasy dancing to James Brown?  What happens to the human characteristics that have given us characters like Arthur Rimbaud, Salvador Dali, Bob Dylan…  you know, people who don’t make any goddamn sense?  And what the fuck did Nietzsche mean we he wrote, “I tell you. One must still have chaos within oneself, to give birth to a dancing star.”?