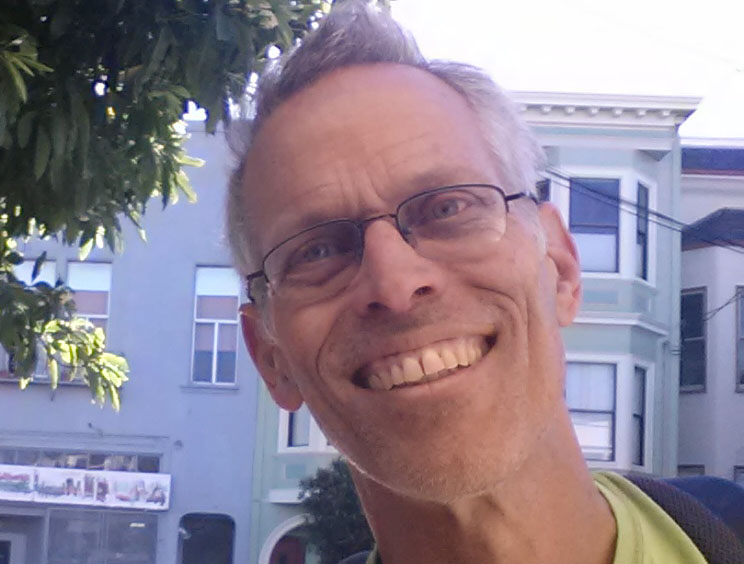 Hank Pellissier is producing two transhumanist events in the near future, TRANSHUMAN VISIONS in San Francisco on February 1, and TRANSHUMAN VISIONS – EAST BAY on March 1. We pinned him down and asked him what the heck is he thinking?

R.U. Sirius: What motivated you to put together the TRANSHUMAN VISIONS events?

Hank Pellissier: I want to create transhumanist “community.” I’ve written about 120 transhumanist articles in the last 4 years, and I’ve edited 4 transhumanist websites, but my conclusion is… transhumanists need more Meat-Time together. Internet-only communities are weak and ultimately boring… for me. We need to socialize: eat together, argue, laugh, flirt, brainstorm, etc. This happens already in very expensive academic conferences (IEET, H+, etc) where mostly PhDs are invited to speak, blah-blah-blah. It also happens annually at the Xtreme Futurist Festival. But here’s my POV. I believe transhumanists need casual get-togethers, that aren’t expensive, that are long enough to meet and mingle and that are, most importantly, Fun. Enjoyable. I’d like there to be monthly gatherings of transhumanists in the Bay Area. No one else is organizing this, so I am going to try.

RU: What positive results can be gained from this?

HP: Everything. Transhumanism needs a higher public profile. If Bay Area transhumanist events occur monthly, the meme will spread, outsiders will be drawn in, transhumanist ideas and projects will find followers and funding. The majority of the American public is highly skeptical of transhumanist goals, but they can be convinced rather easily. I spent Thanksgiving with my relatives discussing with many of them ideas like immortality, digital brains, humans becoming machines, etc…. Transhumanist ideas can seem nonsensical and horrific to somone who just reads them online, but an outsider hearing them in a face-to-face setting… from somone who appears “normal”.. the outsider is far more likely to be persuaded in that setting, especially young people with STEM backgrounds. My goal with these 12-hour monthly conferences is to make transhumanism a mainstram philosophy, at least in this region, a well-known and easily accepted POV.

RU: Would it be fair to say that most of us in the speakers line ups are sort of the outliers of transhumanist culture or would I be insulting us?

HP: Ha!  That might be true, but.. that wasn’t my original intention. My first impulse was to put people in the lineup that I think are good speakers, that are good communicators on stage. I don’t care if they’re famous or not. I have a theater background so I have different standards perhaps; I want the speakers to be accessible, witty, engaging, etc. They don’t need a PhD or numerous books on Amazon, they just have to keep my attention. I went to a couple of academic conferences and they were horribly boring!  I don’t want to do that, I want some entertainment. So we also have funny meme slide shows and immortal hip hop songs, in the San Francisco show, and other gimmicks like Rich Lee and his wicked machines.

But… you are also right. Many of the people I booked will probably not be invited to “academic” conferences. I was told by IEET [ http://ieet.org/ ] that because I personally didn’t have a PhD, I probably wouldn’t get in any of their conference lineups, nor would I be given Fellow status. I found this… elitist. I won’t operate that way as a producer. I’ll strive to be “meritocratic” — if someone is a good speaker, I want them onstage.

My San Francisco lineup kind of evolved organically. I had a nice handful of mostly-outliers, but then… Randal A Koene PhD told me he wanted in. That was great and it triggered a tsunami of new bigshot arrivals. Aubrey wanted in after Randal was in, and with Aubrey in, everybody else wanted in, like Rudy Rucker.

RU: Organizing these conferences, is it difficult?

HP: Yes and No. Producing events is always a financial gamble – I have to pay for the venue and equipment and numerous other budget items. The San Francisco show might cost $6,000. To get back that investment, I need to sell 166 tickets. I have sold 97 tickets so far and I have two months to go, before the show, so I think I’ll be okay.

I have produced a lot of events. For example, I produced the world’s first-ever Atheist Film Festival. Also, I produced the Bay Area’s first-ever Buddhist Performance Festival and Muslim Performance Festival. I started a DAD Festival 15 years ago, and a North Beach Utopia show 4 years ago. I believe a lot of “communities” really want to have public gatherings, they just need an organizer. So I’ve done that, and all those events were successful, in terms of attendance.

The big difference in what I’m doing now and what I did with those previous shows is that I am now trying to create a Monthly Event, not just a once-a-year gathering. This will be considerably harder, but I am willing to try, because I’m committed to transhumanism.

RU: How do you see these conferences evolving?

HP: I’d like them to become increasingly more casual. I’d like there to be Transhuman Beach Parties; Transhuman Summer Camps; Transhuman Monster Potlucks. I suppose it’s nostalgia for the 1970’s, when I was 18-28 years old. Lots of casual time then, getting to know dozens of people, exchanging ideas and affections in a leisurely manner. I think that casualness is necessary for any type of Utopia — small talk, familiarity, friendliness, a sense of humor. Transhumanism already has the brainpower, now it needs a lifestyle with charm. Plus, transhumanism needs more women, of course. I’m trying to organize an April or May show that addresses this issue – women in futurism… we want you!  Please notify me if you want to be a speaker of you want more details. 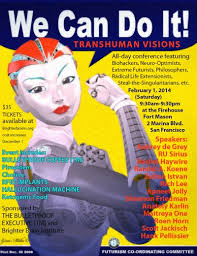 RU: What do you see as the primary problems in transhumanism?

HP: Oh, the usual. Back-biting, nasty gossip, people trying to hard to control the topic or trying to be famous. SIlly normal human flaws. There’s a lot of deplorable behavior in transhumanism, hypocrisy, etc. I find this counter-productive, of course, but it’s also… anti-transhumanist, IMO. I wish transhumanists were as focused on elevating their ethical behavior as they are on extending their lifespan and raising their IQs. I think transhumanists should strive to be ideal role models, superhumans, to be admired and emulated by others. We should be physically-stronger, mentally-smarter, creatively-imaginative, and morally-flawless. We should aim to be honest, kind, polite, inclusive, generous, cheerful, positive. Especially anyone who sees themselves as a “leader” in transhumanism.

We should also focus on our commonalities, not our differences. Constantly fighting about religion or politics… that’s tedious. We should be open-minded towards others. In my March 1 show in the East Bay I am putting on a Mormon, a “Monarchist” and maybe an “Anti-Transhumanist.” Why not? I might not agree with their POV but I think we can respectfully listen.

RU: Should transhumanists be offering up far out and extreme visions or should they be normalizing their visions and making them accessible?

HP: Both. I try not to tell people how to behave. But besides that… both, depending on who you are talking to. A lot of people don’t seem to have enough imagination to handle the far out stuff, so that might be an ineffective approach with them.

RU: Please pick out a speaker or two from the conference and tell us what excites you about each of them.

HP: I like all the speakers. I organized a conference in Washington DC last September called “Radical Life Extension – are you ready to live 1,000 years?” Apneet Jolly was in that show, just doing 10 minutes, and he was funny and full of life-changing information. I personally changed my diet and exercise after listening to him and its been very beneficial. So I realized, A Jolly needs to be heard from, let’s put him onstage for an hour. I am also a big fan of Zoltan Istvan. I thought his book was extremely inspiring. I know I wouldn’t be motivated to produce these conferences without the push I got from “Jethro Knight.” RU Sirius (aww, shucks) wants us to STEAL THE SINGULARITY — I find his ideas very important. I’ve never heard Rachel Haywire speak but she has been a hugely democratizing force in transhumanism, a real ground-breaker, a pathfinder, so her presence is crucial. I am hoping she moves her Xtreme Futurist Festival to San Francisco. If she does that, I will halt TRANSHUMAN VISIONS in the summer so she can promote her own event. Rich Lee is also very inspiring, I love all the biohackers, the notion that transhumanism is a Verb not a Noun. Like I said, I love all the speakers.

RU: Do you think you’ll be successful?  Can once-a-month transhumanist conferences really bring in an audience?

HP: I don’t know. Everyone is telling me to slow down, to do this annually or biannually or at least quarterly. To wait and let it “build on its own.” But I’m impatient. I’m 61 years old, I can’t afford to wait. Besides, I believe I have about about a 30-50% chance of success, and it would be boring if it was less risky than that, wouldn’t it?  If it was easy, it wouldn’t be fun. I have figured it out mathematically; all I need is 200 people, the same people if necessary, to turn up every month. That shouldn’t be too difficult.

There’s an even easier way it could work. Scott Jackisch — the founder of East Bay Futurists — he generously bought 10 tickets to the San Francisco show that he will either sell or give away. 10 tickets, great for me. If I can find another 19 benefactors like Scott Jackisch, to buy 10 tickets each every month, my 20 tickets will be immediately sold. Very easy. If any readers want to help me with this, my email is [email protected]

RU: How would you rate your future optimism level these days?

HP: I am generally an optimist. My wife says I am an Opto-Maniac. I don’t think I’m going to die and I think everything is going to work out great. I’ve just had a lucky life and so I’m naive, I suppose, I think things will proceed very pleasantly for me, as they always have in the past.