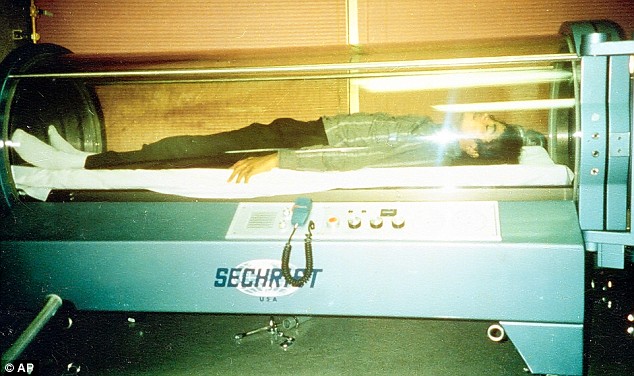 The rumor– whether true or not — that Michael Jackson missed his cryonics appointment, but instead arrangements are being made to have him plastinated by the ever-controversial Gunther von  Hagens would not surprise anybody, if true.  Rather, one is — to some degree — surprised that Jacko did not arrange for the greatest return engagement in entertainment history.

On the other hand, the corporeal world did not treat him altogether kindly.  Sure, he had riches to spend (his own, and then other people’s) and he was positioned to give dramatic expression  to his ego in extraordinary ways.   Indeed, after the phenomenal success of Thriller, he could declare himself the King of Pop and more or less get away with it. (Perhaps he should have had  himself entombed instead like Tutankhamen. Or given his use of Stalinist imagery to promote HIStory, he might have chosen to preserve himself in a glass case along the lines of Mao and  Lenin).  Whatever. Jackson went through serious trials and tribulations and received a lot of abuse for being “weird.”

The popular story is that Jackson was loved and respected for his “innovative” music — his song and dance act, and his videos, but he alienated a good portion of his audience  by doing odd  stuff.   Some of us may prefer to flip that around.

While Jackson was a marvelous singer and performer, and he had some fine and funky musical moments, his musical oeuvre was entirely conventional, as were most of his videos.   Indeed, Jackson and the lyrical and musical sensibilities that he represented were basically reactionary.  It was a step backwards from the musical innovations popularized by The Beatles and others (including others like George Clinton and Sly Stone, in the funk genre).  A “top 40” musical culture that could incorporate the lyrical ideas of a Dylan or a Bowie or a Curtis Mayfield or an Elvis Costello has largely been displaced by the empty entertainment tropes represented by American Idol, and Jackson is the idol of Idol.

Then again, there’s another way of looking at that story. In the days when rock was “important” — for every David Bowie or John Lennon, there were hundreds like Uriah Heep, Emerson Lake and Palmer, Billy Joel…  “poets” who wanted to express themselves via rock and roll but who maybe should have known better.  The “Disco Sucks” movement may have been partly a reaction to the dumbing down of rock lyrics (or at least an abandonment of its quasi-adolescent rebellious themes), but it was also a reaction against disco’s mixed-race, mixed-sexual preference, multi-gendered, urban party uprising.

Jackson’s first (and best) solo album, Off The Wall, was released in 1979, during the disco era.  While he wasn’t a disco artist in the sense that Gloria Gaynor was, it was dance music and it went into heavy rotation at Studio 54 and no doubt wherever club goers gathered around the globe.

Jackson emerged as a solo artist into a rock culture that still had a hint of androgyny (from the ’70s) and in which the word “freak” was a compliment rather than an insult (from the ’60s).   Nonconforming celebrities were cheered on, as opposed to being snarked to death.

While for the most part, Jackson paid attention throughout his career to no one other than himself, some of that zeitgeist may have rubbed off on him.  Jackson was a ‘”permissive” ’70s person.  And had he been an ’80s person, he may have been altogether more constrained in his pursuits.

So Jackson, in his own way, “freaked freely”…  but was he a transhumanist?

In the intervew  from our first issue, which we posted to our front page on Friday, Christopher Dewdney concentrates on Jackson’s defiance of his biological limitations in terms of his transformation of his inherited features — his cosmetic surgery and his change of skin color (he might also have included his cross-genderish style of dress and makeup).

In More Than Human, Ramez Naam predicted that during the next decade, we will be able to genetically alter our skin colors (and this would not necessarily be limited to the usual boring choices. Start being purple?).  This would certainly be a radical transhuman shift, but changing his features is not the only way Jackson gave expression to a dissatisfaction with “natural” life as a given, and showed his interest in mutation and expanded possibilities — and dabbled (at the very least) in transhumanist tropes.  We can also include his use of a hyperbaric oxygen chamber — according to rumors, in hopes that it was a key toward longevity.  Foolish, certainly, but another indication that Jackson was reaching for something other.   Jackson’s fascination with mutation — for better and for worse — was also manifested in his purchase of John Merrick’s (the “elephant man”) skull.   Hey, he even prefigured the contemporary fascination with Zombies with his most popular video for Thriller.

Jackson also lived in a sort-of virtual reality.  Having reached his adulthood (sort of) in an age before VR, he used his wealth to build his own alternative reality in the only way he could — physically  — as manifested most particularly on his Neverland Ranch.  There, Jackson “programmed” his own version of a J.M. Barrie Peter Pan world, and populated it with children (and firewalls, otherwise known as body guards).  He proceeded to marry a virtual reality — the daughter of the King — and, later, via surrogates — he took on his own virtual children to raise up.  As a child star, Jackson was in some ways predestined to live a virtual life, and the abuse he experienced at the hands of his father guaranteed that he would pursue fantasy (and the fantastic).

Last but not least, there is Jackson’s neotony.  Quoting Wikipedia: “Neoteny (pronounced /niːˈɒtɨniː/), also called juvenilization, is the retention, by adults in a species, of traits previously seen only in juveniles (a kind of paedomorphosis), and is a subject studied in the field of developmental biology. In neoteny, the physiological (or somatic) development of an animal or organism is slowed or delayed (alternatively, seen as a dilation of biological time).”  Neotony in a species can be an evolutionary trait — a sign that a species is going to mutate within generations.  In the 1970s, Timothy Leary — himself an early transhumanist — popularized the notion that the refusal of boomer and post-boomer generations to embrace traditional “terminal” adulthood signified a coming evolution in the human species.

Leary’s notion of paedomorphosis was that generations would remain in a sort of adolescent phase up until the birth of the posthuman.  But Jackson never got that far.  The private “virtual” M.J. was a child — a pre-teen — and that’s where the Jackson story went sour.   If Jackson diddled any pre-teens, this is — of course — reprehensible. Even those of us at the edge of this dynamic period in transitional humanity must recognize some boundaries.  Pathology may precede potential in this odd and challenging transition phase moving toward an incomprehensible future, but some virtual fantasies must remain virtual, if at all.

Of course, M.J. was never convicted of sexual acts with children. But he probably died as the result of the emotional strain brought on by his trials, his public shunning, and his period of self-exile, or from the prescription painkillers he took to dull that pain.

In the end, Jackson’s life reads as tragedy, but context is everything.  Given the opportunity, most of us would probably take some of the drama along with some of the glory, the adventure, the money, the indulgences, the ego strokes…. I mean, it was a pretty rich life — in all senses of the word.

Michael Jackson is obviously not an example of transhumanism to be followed.  But he is a signpost on the road to post-humanity.   I believe the future will study him from that perspective, and in some odd way, it will learn from his many mistakes.