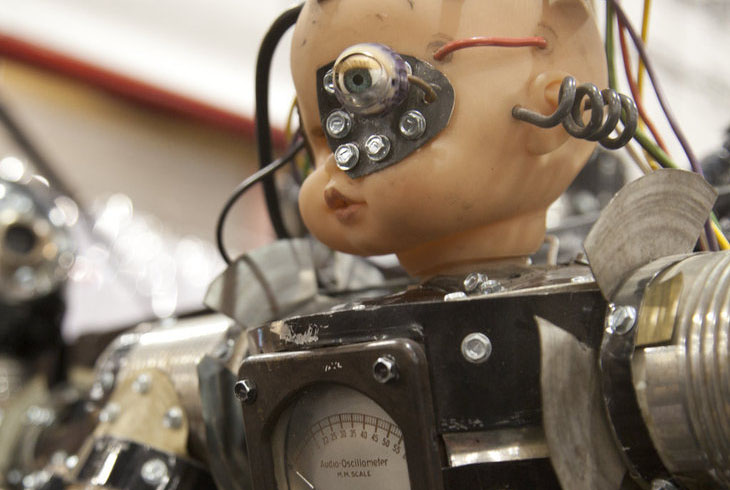 Cloning may still be a few years away, but in Cyborg Babies: from Techno-Sex to Techno-Tots, a collection of essays edited by Robbie Davis-Floyd and Joseph Dumit (Routledge, 1998), we see how technology is increasingly intervening in every aspect of birth and child rearing.

Several authors, the most notable being Sherry Turkle and Mizuko Ito, examine the complex relationships that evolve around in-vitro fertilization and surrogate motherhood, and coin terms such as “techno-semen” (the offering of an artificial insemination donor). Ultrasound imaging, abortion, biotechnology, electronic fetal monitoring, fertility drugs, amniocentesis, techno-toys for tots, and anesthesia are also hot topics deconstructed in essays that are one part medical reporting, one part Foucaultian culture theory, and two parts futuristic medical anthropology.

R.U. Sirius recently spoke with Davis-Floyd and Dumit about their book and their views on technologically assisted birth and childhood.

R.U. Sirius: Your book suggests that we’re all cyborgs. This is trendy among theorists and technophiles, but how would you respond to the average person, who might find that an exaggerated interpretation of current social reality?

Robbie Davis-Floyd: In some sense, it is exaggerated. Clearly we’re all still human.

First, we’re still mammalian — we still eat, drink, excrete, reproduce sexually, and die. But the ways in which we do these things have become increasingly intertwined with the technologies we’ve developed. Millions of us eat highly processed foods most of the time, drink chemically synthesized concoctions out of cans, alter the mode and timing of our excretions with an endless array of drugs, deconstruct every aspect of sexual reproduction and alter it technologically, and die hooked up to sophisticated machines that can keep us alive artificially should our families so choose.

Second, we’re still self-aware sentient beings searching for meaning in our lives, with free will to determine our individual destinies. But those destinies are increasingly lived out inside of a web of technologies that both offer us endless possibilities for self-development and limit our choices to only the pathways that technology paves. Unless you’re Amish, there’s no choice to ride a horse or drive a buggy, or in many places even to walk.

In short, our current social reality is almost entirely cyborg. We’re so immersed in it that we seldom notice.

Joseph Dumit: The idea of the cyborg in Cyborg Babies can be understood as a question and a challenge. Current language for describing contemporary conception, birthing, and child rearing is woefully inadequate. For instance, Charis Cussins found that in identical situations of egg-donor in-vitro fertilization, different women are identified as the “real” mother depending upon who pays for what. Elizabeth Cartwright found that electronic fetal monitoring not only reports what is going on inside the womb during labor, but ends up restructuring the entire birth process. [Note: In the chapter “The Logic of Heartbeats: Electronic Fetal Monitoring and Biomedically Constructed Birth,” Cartwright shows how medical professionals demand specific behaviors of expectant mothers as the result of these tests. Frequently, monitoring results lead to emergency intervention. The point is that most women managed to give birth fine before fetal monitoring was introduced. -Sirius] Asking: “How are these processes cyborg-like?” challenges us to come up with concepts that deal with the messiness of the process, and with our own fears and fantasies of the artificially normal — such as a painless, risk-free birth — and the naturally abnormal — such as birth defects.

The Cyborg concept also pushes us to re-imagine the more mundane aspects of our lives as science fiction. What does it mean that (as Steven Mentor writes) the language of in-vitro fertilization uses the same gambling metaphors as Las Vegas? What does it mean that this current generation of middle-class children are all exposed to ultrasound, mostly growing up from age two on with computer simulation games and responsive toys like Tamagotchi, and many growing up on Ritalin?

Sirius: There’s a chapter in your book called “Babies Don’t Feel Pain” that, among other things, exposes some new pains and traumas that are being caused by the technologization of the birth process. Many of us have assumed that there have been substantial improvements in sensitivity around childbirth, both toward the women and children, as the result of consciousness-raising during the ’60s and ’70s.

Davis-Floyd: There have been substantial improvements. Up till the late ’60s, women commonly gave birth tied to the delivery table heavily drugged with scopolamine, which didn’t actually anesthetize them but rather made them crazy during labor and then made them forget the experience after the fact. During labor they would writhe, scream, attempt to escape, and generally act like wild animals — all of which justified tying them down, sometimes for days, till the baby came. The natural childbirth movement changed many things permanently.

As for current technological interventions, like epidurals and electronic fetal monitoring, they’re problematic. And so the Cesarean rate, which should never be above 10 to 15 percent, is still around 22 percent. And the rate of operative deliveries (Cesareans, use of forceps and vacuum extractors) is over 60 percent in many hospitals.

But most women are relatively content with the system as it is. Babies, however, do still suffer a great deal of pain and trauma, as it is not widely recognized in hospitals that they are sentient beings with consciousness and memory. So as the piece you mentioned by David Chamberlain points out, they’re handled roughly, given all kinds of shots, tests, and procedures immediately after birth that could easily wait till days later.

Dumit: In some unfortunate cases, information that was a front-page horror story — the terrible effects of the drug DES on the daughters of women who took it — has somehow gotten lost among the current generation of doctors, resulting in more tragic pregnancies. Back in the forties, DES was pushed harder than Viagra and Prozac combined. On the other hand, the forced use of formula to feed new infants in hospitals has declined.

Sirius: Childbirth seems to be evolving into a collective team effort for a fair number of people. There are cases where three women are involved in the birth of a child: the infertile “mother” who will be raising the child and who is paying for the procedure, the egg donor, and the surrogate mother who carries the fetus to term. How much of a challenge is this peculiar situation to the nuclear family and might it eventually lead to a new acceptance of collective child-rearing?

Dumit: Actually, the reverse is true. There’s an ever-intensifying attempt to pin down the “real” connection, and if that doesn’t work, to hand the matter over to a judge who will legally impose a real connection. Why hasn’t the collective model of baby making led to a similarly collective model of baby rearing? My sense is that the property model — inheritance (in the monetary sense) and responsibility — is too powerful. The question is not who are the real child-rearers, but who are the real child-owners.

What you actually have is more of an acceptance of virtual child-rearing, using Sandy Stone’s notion of the virtual as a collective endeavor in which the network and the hardware are also active participants. In that case I think there is a mutation in virtual child rearing, with an ever-expanding set of rearing participants: experts, talk-shows, and online discussions.

Then there’s the phenomenon of chain or franchise daycare (like the one where my son goes) which sponsor children’s shows (like Arthur) and in general are creating their own brand identity. What does it mean that my 2-year-old spends more awake hours with Mulberry than with his bioparents, that he divides people into two kinds, “kids” and “teachers” and according to him, I’m a teacher?

Sirius: Feminist techno-theorist Donna Haraway made the oft-quoted statement, “I’d rather be a cyborg than a Goddess.” While showing a photograph of herself giving birth, Robbie told an audience “I would rather be a goddess than a cyborg.” Nowhere would this question, cyborg or goddess, seem to be more poignant than in the issues of natural vs. technological childbirth. Yet Robbie’s piece (“From Technobirth to Cyborg Babies”) and much of what’s in the rest of the book, seems to imply a search for the exact happy medium between these seeming poles. Comment?

Davis-Floyd: Well, indeed, a happy medium seems like the ideal: judicious use of technology coupled with a healthy respect for the natural. Of course, the natural and the technological are not really polar opposites. As I point out several times in that chapter, humans have been furthering their evolution through technology since they arrived on the scene, and no doubt the utilization of tools played a strong role in driving the brain development of early hominids and thus the “natural” evolution of humans. This complex intertwining of humans with their technologies is what we are trying to get at with the notion of the cyborg.

So why would I rather be a goddess than a cyborg? Why set up a polar dichotomy between those two that doesn’t really exist? The thing is that in childbirth, that polarity is real, because hospital birth has become so extremely technologized that we are literally doing harm to the natural process. As a woman giving birth entirely on my own, pushing my baby out through pain, tears, and ecstasy, I came as close as most of us can to embodying what I call the Goddess or the feminine creative principle, and to holding a space in this increasingly cyborg society for all that She is and implies.